Great product for the price! Fun an inexpensive to modify and personalize. Getting a Colorado title was fast and easy.

Pretty good little ATV so far. It is pretty cold blooded though, definitely takes some cranking to get it to start and run. Once its warmed up it does pretty good.

J
Cheetah i6 all electric, kids off road go kart. 3 speeds, with reverse, 48V 20Ah battery pack Josh I.
Pretty Good, Smaller than the pictures lead you to believe, Turns too much to the right

So it's smaller than it looks. I was a little surprised when it arrived as it's much smaller than the pictures seem to show. My 2 kids barely fit in it together (7yo/5yo, 55lbs/45lbs, so they are not big), the second child's has to be careful to keep there feet on their side because there is not a lot of room for the petals.

The steering is weird. It doesn't turn left more than a few degrees and turns extremely right. Hopefully can be adjusted because it's pretty bad.

The "parking brake" isn't really usable as it is just a metal bar you have to manually move. but it's on the back of the petals, so you really cant reach it.

Also, the speed control is right on the dash in front of the passenger seat so its too easy for a second rider to fiddle with while being used. It needs a tamper cover. The Forward/Reverse says "On/Off". Seat belts are too large to adjust for smaller riders, but we were able to jigger them until it seemed okay.

Brakes are solid, motor/batteries seem to charge and perform well. Headlights are nice. Rollcage is nice. Goes together pretty easily. There were no assembly directions, so I had to wing it.

At the end of the day, I would give it 4 stars, because there are no other off the shelf options for an electric gokart. My kids love it. But it is not perfect and hopefully there are some improvements in future versions. 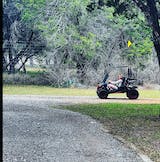 This was a gift to myself, I've owned it for 30 days & its a blast! It's definitely a competition bike! If you want to trail ride with kids, I'd recommend the 230cc model. This 300cc is super quick & great for MX and Enduro. Not the best for slow trails unless you gear down the sprockets. I've since put on a rad fan kit & street legal light kit from OHVstreet. I'd recommend the TM38 to anyone thinking of buying it. I researched the EGL/SSR/&TM38. The Trailmaster is a top shelf assembly in my opinion. The NC250/300 engine has tons of aftermarket parts available as well! TM is a ktm350 copy, so easy to repair if needed.

I bought 2. They were easy to assemble. Pour gas in .. and they start right up. They seem sturdy, and comfortable... The motors run fine but you can tell they are made with the cheapest components...

Easy to put together. Runs and looks great!

Good machine good service. People on the phone were cool as hell. Happy with the product. A little confused though. When I ordered it I picked red or blue spider man design. I got a blue one but it’s definitely not what was in the picture when I selected it. Still happy with it just confused by that.

The bike looks great my only complaint is that we got it delivered and when we opened it the clutch handle was broken on the bike.

We bought our UTV “80% assembled”. There were no instructions. After it was assembled, we noticed a missing fuel line. After buying a fuel line at an automotive store and installing it, we had trouble starting it and ran down the battery. We purchased a trickle charger and finally got it started and running. We still aren’t sure how to put the side safety nets on, but it’s running well and fun to drive.

Seems to be a decent value. We put it together using the manual. A set of instructions would be better. The only thing I see immediately is that the go cart is hard to start. The kids have been riding and it seems to be doing the job just fine. I would like to update after we use it for a while.

My only issues were not getting my color choice and the carb float metering was off causing it to flood and leak gas out of the overflow. A quick adjustment and issue is resolved. I like it! But I’m not throwing this thing sideways on a tabletop… it’s for trails and will do that well

My grandsons, they really enjoy riding their bike. It was really easy to put together, it started up and ran like a clock. Thanks

It came requiring minimal assembly and was running within a few hours.

So far very nice dirt bike well worth your money

This little machine is a blast!! Riding in the snow is an extra blast.

The kart is pretty nice and fast. Once put together and got passed the tires that had cores that were not tightened which caused the tires to not retain air, and the dented gas tank that had to be straightened out just to put gas in it. Would buy again. Now that the corks are done this seems like it will provide years of enjoyment if taken care of.

I bought for my son for christmas, and he absolutely loves it! We have only ridden up and down the street, but will be taking to the dunes and camping very soon. Very impressed with the power. I hate that there is no directions on what all needed to be put together. What the remote is for, but I think I got it all figured out. I'll make a review video and upload to youtube for other purchasers to learn from my mistakes. I think this will last a long time! We shall see! I would have put 5 stars if I had directions explaining things and how to use.

This is a Great Go Kart for Youth! It was very easy to assemble and has everything your kid needs! You will be very happy with this purchase.

Great bike kid loves it and very safe for him. I have a hard time starting it I’ve adjusted everything and still doesn't like to start when cold but once it’s been running for about 10 mins kicks over everytime.

I paid for 100 percent assembly,yet I had to assemble the top half with some holes not lined up. Other than that we are having a great time. Lots of family fun.

There is limited supporting information and the manual is useless. Quality is questionable on finishing details. Very loud, shakey and rough ride